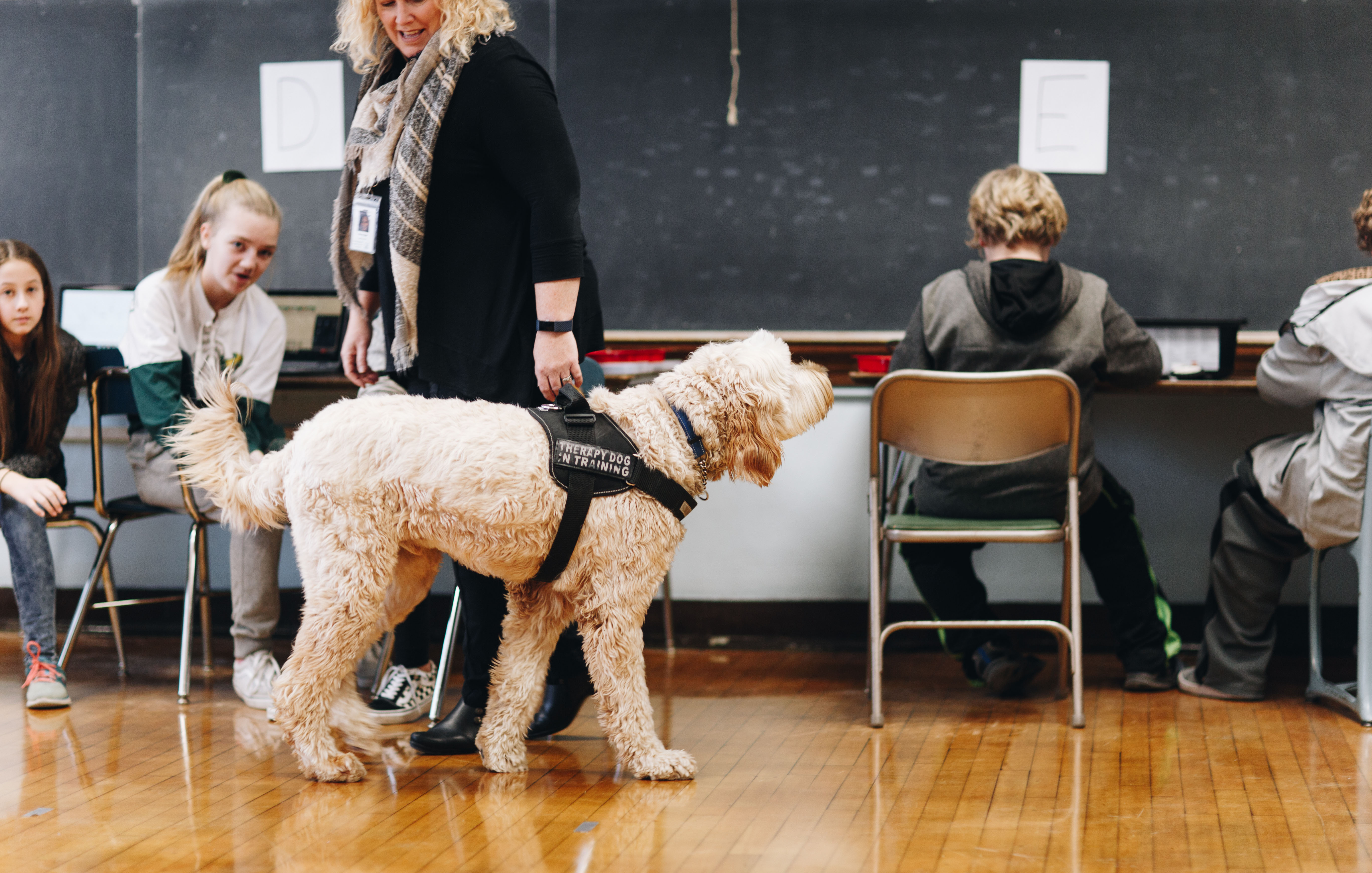 Students flocked around the office at the end of a blisteringly cold and windy December day, but it had nothing to do with the unwelcoming weather they were about to embark on for their journey home. Instead, it was because they needed some time with, as one student called him, "Bleau-ey."

We're of course talking about Bleau, the therapy dog who spends his days at Washington Middle School. He's one of two certified therapy dogs that the Public Schools of Calumet, Laurium and Keweenaw have on their campuses. The other is Tucker, who spends his days at Horizons Alternative High School in Mohawk. Both are doodle mixes, which are well known for their loving personality and because people with dog allergies generally aren’t affected by them.

On a day-to-day basis that student reaction from Bleau is exactly what the school was hoping for. The students are more engaged. They're excited. They're bonding over a mutual, positive experience.

Earlier in that afternoon Bleau had walked into the art classroom where the teacher quickly told the students, "if you want Bleau in here, you need to keep your volume level at a .5 or less." At that point you could hear a pin drop. But you could also see the smiles, watch the pure joy on a student’s face and even the aide that was helping the class couldn't help herself from showing Bleau a little bit of love.

Bleau plods around the school with his caretaker, Nora Dee. Dee is the secretary for the middle school and has watched Bleau since he was a puppy, including bringing him to the eastern U.P. for special training on how to be a therapy dog.

"The students love him," Dee said. "And he loves them back. He loves walking around these halls, saying ‘hi’ to everyone as they pass by with a tail wag."

He's quick to roll over for some tummy pats as well. That's where he is mostly useful to some of the students. As the long days wear on for some students, they need a release from their normal that a bathroom break, time out, lunch break or recess just can't provide. That's what Bleau was providing that afternoon to one student who, Dee says, comes to see Bleau nearly every day. He patted Bleau, told him he's a good boy and had his day turn around.

Dog owners know that kind of joy is hard to replicate with other programs or activities. But Bleau and Tucker are quickly turning everyone at the district into believers.

"I was one of those who didn't see it," said Darren Kinnunen, social worker at the elementary school. "But one day I had a student who was having a rough day and Tucker came in for a visit. He went right past the other kids right to that student I knew was having a hard time. That student was immediately in a better mindset."

Examples like that continue to happen on a daily basis at CLK schools, and it could lead to another therapy dog being added at the elementary school and/or high school in the future.

"Students and staff are embracing our service dogs even more than we thought possible," said Chris Davidson, superintendent at the district. “It has helped us capture the hearts of students, which will be huge for us as we help them grow.”

The introduction of therapy dogs is one of many parts of the district's Creating a Trauma Informed School grant, which started in 2018 and continued in 2019. In total, more than $80,000 has been invested into the district for the program. Portage Health Foundation hopes the working pieces of the program can be expanded to other districts in the four-county community moving forward.